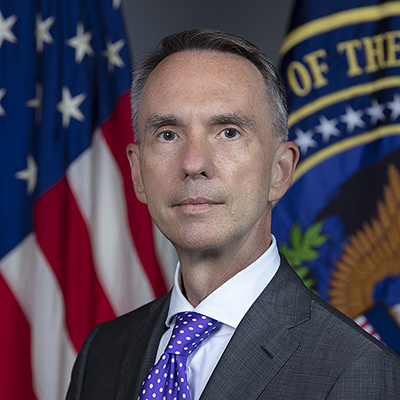 Technological innovation can be difficult to achieve in the Intelligence Community, but as increasingly sophisticated threats emerge, agencies must innovate to stay one step ahead.

As the U.S. infrastructure becomes increasingly reliant on digital solutions, citizen services have become more accessible and workflows for public servants have streamlined — but as much opportunity as this digital shift brings, it has also left the nation vulnerable to threats on a new battlefield. The shift creates an operational imperative for the Intelligence Community to innovate and implement new capabilities to protect our nation and allies from actors across the cyber, space, and physical domains.

According to Andrew Hallman, vice president, National Security Strategy and Integration, it is a challenge for the intelligence community to stay dominant against adversaries in the contested domains of the internet, cyber and space, where the democratization of technology has put the power to destabilize institutions and our national security into the hands of a range of threat actors.

“This newfound digital dependance, while very positive in some respects, has also allowed for democratization of emerging and disruptive technology, which puts our national institutions at risk. We have already seen a substantial increase in cyberattacks and threats,” says Hallman, who was the first Deputy Director of CIA for Digital Innovation and later served as the Office of the Director of National Intelligence’s (ODNI) Principal Executive.

To outpace increasingly sophisticated adversaries in a complex and unpredictable digital threat landscape, the 18 agencies and organizations of the Intelligence Community must reengineer their digital foundations to allow for faster innovation and increased collaboration.

While intelligence agencies may be enticed by a multitude of new and exciting technologies on the market today — artificial intelligence, internet of things, proliferation of sensors, advances in computing, 5G telecommunications— Hallman believes that to effectively leverage those technologies they must first take a step back and ensure they are on solid footing.

“While agencies may want to gravitate toward the ‘sexy’ new forms of technology, they actually need to rethink their digital foundations first because, without secure, solid networks and infrastructure, advanced technology becomes siloed and less effective,” he explains.

For Hallman, strengthening digital foundations starts with a Community-wide shift to secure cloud computing so agencies can take better advantage of what he calls the “lifeblood” of the intelligence mission: Data.

“Data is the new tip of the spear for national security,” Hallman says, “because our operational advantage will be determined by the speed with which we can sense our adversaries’ moves and counter them. With real-time sensing and data integration, we can collect, ingest, condition, analyze and characterize data representing the threat and then ultimately act on it.”

Hallman goes on to say that Observing, Orienting, Deciding and Acting—the notorious “OODA loop”—in many cases will now operate at machine speed.

Increasing Collaboration to Speed Up Innovation

As secure cloud networks and data services are operational, agencies can focus on integrating and innovating with more advanced technology in their environments. Even more important, according to Hallman, is accelerating the speed of innovation to compete with emerging threats.

“As the country moves into an era of peer adversarial competition with China and Russia,” he says, “agencies must learn to operate faster in digital environments.”

Creating a common data fabric is a critical step in maintaining a competitive edge, says Hallman; it enables intelligence agencies to collaborate, share data and bring their complementary missions together to build a more integrated Community.

“We have to think about the Community holistically, and not just in the individual silos,” Hallman says. “There’s been great work in this area already, but further integration of intelligence agencies and their technologies and deploying capabilities against threats in an optimized environment is critical to the speed imperative.”

To Hallman, cultivating a culture of innovation is just as important as implementing new technology, especially because speed and innovation have not traditionally been top Community priorities.

“Right now, we still have a predominant culture of executing on the day-to-day mission first, and then focusing on innovation or talent development when there’s time,” he says. “This mindset could be a detriment in the face of constantly evolving threats — moving too slowly is a strategic risk.” Hallman says the Community needs to embrace the imperative that a culture of rapid adaptation needs to become second nature in the Community’s conduct of its day-to-day business.

Leveraging Innovation from the Private Sector

As the world evolves, technology has sprinted past the digital foundations that once provided leaders and war fighters with a decision advantage to operate at the speed of the need. Rebuilding digital foundations to keep pace with emerging technology and increasing collaboration may seem daunting for already-strained intelligence agencies, which is why Hallman calls for increased partnerships with the private sector to reimagine digital infrastructures and help drive faster innovation.

“There is a great opportunity to leverage the speed of innovation in the private sector and assimilate their emerging technologies into the Community’s work,” he says. “We need to make the membrane between the public and private sector more permeable. And while there are nascent efforts underway in the Community to do that, I don’t think we’re at the scale we need to be to propel a culture of innovation.”

Hallman and his colleagues at Peraton work to foster these relationships and have already assisted several intelligence agencies integrate high performance tools and capabilities at every step of their digital evolution — including foundational IT software, cloud and data services, and network solutions, as well as more advanced capabilities in the fields of communications, cyber, artificial intelligence and real-time data analytics for sensemaking, predictions and anomaly detection.

“As a premier mission capability integrator, we work with a very strong network of trusted partners, suppliers and laboratory capabilities to apply that commercial technology to the particular needs of our intelligence customers’ missions,” Hallman says.

Hallman is optimistic that current efforts to promote innovative behaviors and practices in the Intelligence Community will generate tangible progress.

“Based on what we’ve seen, the government is starting to devote the time and resources to cultivate an environment of innovation to make the Intelligence Community more competitive against our peer adversaries,” he says. “With more interagency collaboration and stronger industry partnerships, we will have a solid commitment to investment in our nation’s security.”

Learn more about how Peraton can help your agency speed up innovation.

HERNDON, VA — August 3, 2022 – Peraton has been awarded a contract by the Department of Defense (DoD) to provide agile analytic platforms and data management solutions. The contract is worth $850 million over five years. Peraton has a decades-long relationship with the DoD and, more broadly, extensive experience in providing technological solutions across
Read more