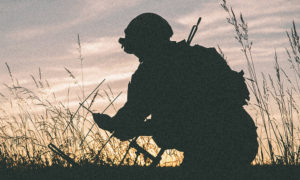 “What can you do in preparation for something that’s never been attempted? Well, you do the can’t be done,” said Program Manager Jason M.

During a week-long period in February followed by four weeks in April, Peraton successfully tested a Satellite Ground Terminal (SGT) prototype in Georgia and Florida. The prototype is intended to improve access to data from intelligence, surveillance, and reconnaissance (ISR) satellites as part of the U.S. Army’s push toward Multi-Domain Operations (MDO) command and control and battle management.

The SGT prototype is expected to transfer up to 1,000 times more satellite data to operators than currently possible. The terminal also has a small antenna and mobile capabilities, which will help warfighters receive critical real-time information in the field.

While waiting for a satellite to launch, Peraton employees put a signal generator on a drone to mimic the new frequency as a novel way of testing.

Two employees who supported SGT test operations came to Peraton through the Department of Defense’s Skillbridge program, which provides service members with the opportunity to gain valuable civilian work experience through internships, apprenticeships, and industry training during their last 180 days of service. As a company committed to veterans, Peraton is an authorized participant in Skillbridge.

As an Army veteran and the chair of Peraton’s veteran employee resource group (VALOR), Jason is passionate about bringing military veterans to Peraton. “The Skillbridge participants I’ve worked with really get their hands dirty—they’re not making coffee or shadowing employees.”

Tim became certified by the Federal Aviation Administration as a drone pilot, which he then applied directly as a drone operator for the SGT tests. Ana participated in a formal SGT operator’s course, which covered how to set up and tear down the system, how to operate using the software, and troubleshooting.

Both veterans are now full-time Peraton employees, and Ana serves as the SGT team lead.

The Peraton SGT team will provide guidance on strategies for implementation and operations for Future Army Ground Stations. These research and development capabilities create value for the customer as well as to Peraton.