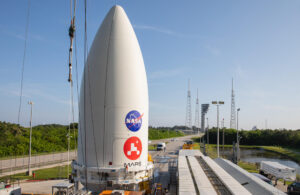 Peraton makes space missions happen, including NASA’s Mars 2020. From protecting spacecraft from destruction to receiving the scientific data sent from Mars back to Earth, Peraton plays three critical roles in NASA’s mission to land the Perseverance rover on the Red Planet in February 2021.

COMMUNICATING WITH THE LAUNCH VEHICLE

Peraton’s Space Network (SN) team provides services to many missions that further the exploration for human space flight and improve our understanding of the Earth and space science. Peraton works hand in hand with NASA to provide telecommunications, tracking and clock calibration, and testing and analysis services for spacecraft operating in or around earth orbit, including the launch phases of deep space missions like Mars 2020. The SN works out of its two ground stations in White Sands, New Mexico, two remote ground stations in Guam and Blossom Point, Maryland, and NASA’s Goddard Space Flight Center in Greenbelt, Maryland.

Peraton’s SN team worked over the past eight months to ready the communications for the Atlas V rocket that will send the Mars 2020 spacecraft on its way. They have inspected the entire integration process into the SN through a Mission Operations Readiness Review, which makes sure that the ground equipment is ready to support the rocket. After rigorous testing of every component, the SN team will oversee communications with the Atlas V launch vehicle beginning with ground support and continuing through the first four hours of the mission support to the ground during the initial launch and journey into space.

During the launch, members of the SN standard operations crew will monitor the Tracking and Data Relay Satellite (TDRS) spacecraft telemetry and ground equipment performance and are ready to troubleshoot any issues communicating with the rocket. Approximately four hours into the mission, the SN will end communications with the discarded Atlas V and the team’s role in the Mars 2020 mission will come to an end, though that will not be the end of Peraton’s involvement.

COMMUNICATING WITH THE SPACECRAFT AND PERSEVERANCE

The Deep Space Network (DSN), run by NASA’s Jet Propulsion Laboratory (JPL), is involved in every step of the Mars 2020 mission, serving as the communications pipeline. The DSN is the world’s largest and most sensitive telecommunications system, comprised of large antennas with very sensitive receivers and powerful transmitters. It maintains nonstop coverage at sites in Goldstone, California; Madrid, Spain; and Canberra, Australia.

Peraton’s DSN team provides a wide range of services to JPL, including mission planning and preparation, compatibility testing and validation of ground stations and spacecraft, and engineering services.

Each of the DSN sites has a centralized Signal Processing Center with the electronics that move the antennas, process telemetry data, and send out new commands to spacecraft. Peraton’s role for Mars 2020 includes this signal processing. Signals come in from space at a billionth of a billionth of a watt, which the DSN then amplifies, interprets, and disseminates.

The DSN provides two types of communication for deep space missions: Direct to Earth and Relay Operations. Direct to Earth is a direct radio signal between the rover on Mars and the DSN. For Relay Operations, signals sent from the rover on Mars are sent to nearby orbiting spacecraft, which send their own data signals back to the DSN along with the rover’s Mars data. The DSN team will connect with the Mars 2020 spacecraft and rover soon after launch and will continue to talk and listen to Perseverance throughout its multi-year mission on the surface of Mars.

The DSN communications pipeline allows NASA to bring the wonders of deep space exploration to Earth and acquire knowledge within and beyond the edge of our solar system.

Without Acusil®, Peraton’s proprietary lightweight, silicone syntactic, foam-based thermal protection system, the Perseverance rover would not arrive intact on the surface of Mars. 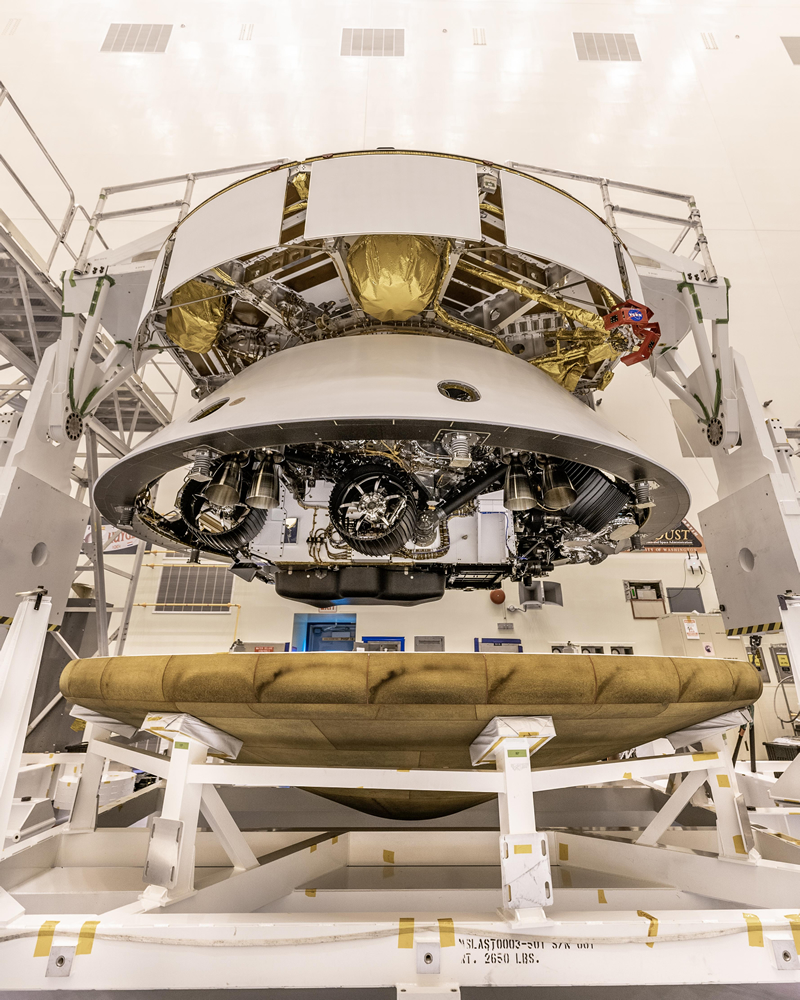 The back shell contains the Perseverance rover.
Courtesy NASA/JPL-Caltech.

During the entry, descent through Mars’ atmosphere, and landing on its surface, the spacecraft experiences friction that creates temperatures up to 3,200-degree Fahrenheit. To defy these extreme forces, Peraton was hired to develop an Acusil coating for the Mars 2020 spacecraft’s parachute cone, which shields the vital parachute and communication antennas from damage while still enabling the vital flow of radio frequency communications for tracking, telemetry and command.

“Enabling the exploration of a foreign planet is my geekdom,” says Acusil program manager Bruce B. “It’s the pinnacle of an aerospace career to know you are contributing to the knowledgebase of humankind.”

Peraton is proud to support NASA in its continued pursuit to better understand what makes an environment hospitable and search for ancient life on Mars, and looks forward to supporting critical future missions including the return to the Moon.