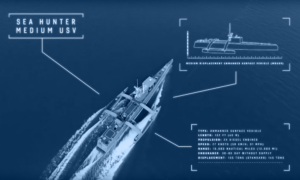 “Unmanned platforms play a vital role in our future fleet,” Gilday wrote. “Successfully integrating unmanned platforms—under, on, and above the sea—gives our commanders better options to fight and win in contested spaces … by the end of this decade, our Sailors must have a high degree of confidence and skill operating alongside proven unmanned platforms at sea.”

But everyone—starting with the Navy—acknowledges there is a long way to go. “Our infrastructure right now is optimized around manned warships,” said Capt. Pete Small, program manager for unmanned maritime systems. “We’re [going to] have to shift that infrastructure for how we prepare, deploy, and transit.”

While the Navy is moving forward with aggressive R&D and procurement activities to build out its unmanned capabilities, fielding new platforms is only the beginning. A less visible, but just as far-reaching challenge lies in developing the ecosystem of people, services, procedures, and technologies to enable the functional integration of unmanned capabilities into the Navy at scale.

Across operations, logistics, maintenance, and sustainment of these high-tech unmanned systems, there are no large-scale Navy training programs, nor is there an unmanned enlisted rating. Due to the regular rotation of sailors, by the time they become masters of their specific unmanned skill or system, it is time to transfer to a new unit where they may not work on unmanned systems.

“Developing one or more unmanned rates is critical to maintaining organizational and systems knowledge in the Navy of tomorrow, as is working with the Navy’s current industry partners to develop more advanced training and maintenance programs,” said Navy veteran Kevin Hagan, Unmanned Systems Account Executive.

Leveraging commercial off the shelf (COTS) products and adapting them to support Navy unmanned systems carries a low cost and high degree of effectiveness. But using different platforms, software, and algorithms can result in integration issues, which will only increase as the unmanned enterprise grows. Additionally, each new system presents both cyber and physical security challenges. The creation of a coordinated, networked fleet of unmanned systems for tomorrow’s maritime domain depends on finding scalable solutions to these problems.

“While the Navy addresses its own internal challenges, it also needs to cultivate the right industry partners in this season of transition,” said Hagan. “American small businesses are the ones thinking way outside the box and pushing the real advancements in technology.”

For example, Peraton has partnered with one innovative small business on its own exploratory project: enabling a long-distance semi-submersible to store and launch smaller unmanned vessels and transmit their collected data in real-time via satellite, without human involvement.

Moving forward, close collaboration is critical to avoid duplication or inefficiencies. For example, the Marine Corps is already increasing its use of unmanned maritime logistics and sensor systems to better manage the littoral battlespace and take over ISR duties and is pushing toward unmanned assault and logistics capabilities for amphibious operations.

The Navy submarine force also appears poised to invest in unmanned systems and supporting infrastructure, including refueling, data storage, and data transmission systems, as part of its subsea and seabed warfare initiative. The new Columbia-class submarine is being designed with a compartment to allow it to deploy remotely operated vehicles.

“We will have to wait and see how the submarine force’s subsea and seabed plan align with the broader Navy expectations for deployment and utilization of unmanned assets in future fleets,” said Navy veteran Joe Huhman, Director, Unmanned Systems Program Management Office.

“In Peraton’s 25 years supporting unmanned maritime systems, we’ve seen the Navy make major leaps and bounds,” noted John Coleman, President, Defense and Homeland Security sector. “To achieve the future of unmanned envisioned in current force planning, the Navy will not only need to develop a new operational architecture but will also need to develop the supporting ecosystem of people, policies, and innovations that will enable unmanned systems to thrive in the future and counter the growing influence of adversaries across the globe.”