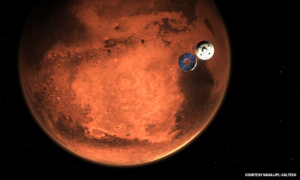 The landing of NASA’s Perseverance rover on February 18 is a monumental occasion, but this mission is not an isolated event. Every Mars exploration effort has contributed to Perseverance’s successful journey.

There have been 51 Mars missions since 1960. Nearly half of all missions have failed, but even failure provides critical lessons that are applied to future missions. Successful Mars missions yielded fruitful results, lighting the fire of curiosity each time to answer even more questions. NASA has established four goals for Perseverance and its companion helicopter Ingenuity: find evidence of ancient life, understand the Martian climate, analyze the Martian geological system, and prepare for human exploration.

Over the decades, NASA’s goals have remained constant. Exploring Mars can teach us how the planets change, providing insight into the future of Earth and uncovering a trove of useful information about the solar system more broadly.

“It’s been a consistent vision and destination, but at times Mars has been very elusive,” said Darin Skelly, Peraton’s Vice President of Civil Space and a former NASA mission manager. “It’s a game changer if they find water – if there is water, there is life. And could you imagine if it’s with our direct solar system neighbor?”

“There are discoveries and geological examples that show there was active water and a richer atmosphere on Mars millions of years ago,” Skelly continued. “Modeling and understanding the geological and atmospheric evolution of Mars provides insights to better model and understand our own planet’s climate changes. Each mission has been complementary, building on previous technology and approaches and applying new methods, such as drilling into the surface or flying helicopters within the atmosphere.”

Over the course of 30 years, Skelly was part of the NASA teams responsible for design review and launch, test, and integration of Sojourner, Odyssey, the Mars Global Surveyor orbiter, Cassini, and many others. He has witnessed firsthand the upwards trajectory of technological innovations and improvements, leading to fewer crash landings, failed launches, software and hardware mishaps, and other engineering problems that can arise in complex missions.

The first Mars missions were flybys, which took pictures of the planet from afar to sketch out its features. After several failed attempts by Russia and the United States, NASA’s Mariner 4 flyby in 1965 took the first close-up images of Mars. Then both Russia and the U.S. launched successful orbiters in 1971—the Soviet’s Mars 2 and 3 and NASA’s Mariner 9. The orbiters took more detailed images and monitored Mars more closely than the flybys could, picking up on weather patterns, atmospheric conditions, and topography.

NASA’s Viking 1 and 2 touched down on the surface of Mars in 1975, providing images back to researchers for nearly a decade. NASA is the only space agency to land on Mars, though China is trying to land its Tianwen-1 rover on the Red Planet later in 2021.

NASA’s Mars Exploration Program was founded in 1993 to maintain a continuous strategic outlook on all Mars missions. The Sojourner rover in 1997 was the first wheeled vehicle operated extraterrestrially, successfully conducting on-site scientific studies. The 2001 Mars Odyssey orbiter, still operational today, has been mapping chemical elements and minerals, measuring temperature and radiation, photographing topography, and serving as a communications relay back to Earth for vehicles on Mars.

The Spirit and Opportunity rovers—“robotic geologists”—landed on Mars in 2004 and used scientific instruments to confirm past water activity. The Curiosity rover landed on Mars in 2012 to continue the search for life in Gale Crater and the Insight rover landed in 2018 to examine the geology underneath Mars’ surface to learn how planets are formed.

“It hasn’t been an easy ride by any means,” said Skelly. “These missions are not cookie cutter. Each was designed and tested for its unique mission and science objectives, as well as the launch injection parameters. Mission planning, including planned launch dates, are established early in the design development and planning efforts. These launch dates hold constant no matter what, which equates to enormous pressure on the team. But a successful Mars landing makes it all worthwhile.”

The Perseverance rover, along with a planned NASA mission in the next decade to return Perseverance’s cached rock samples back to Earth, hold enormous potential for understanding the future of Earth and how to prolong its survival, and how to safely send humans to Mars to determine its habitability.

“Exploring Mars is a part of who we are,” said Skelly. “We need to continue to push the frontiers of space and push the advancements of technology. It’s in our genes.”