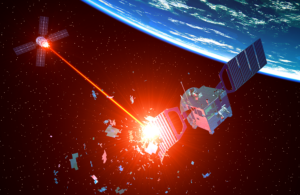 As the cost to own space assets decreases with technological advancement, the barrier to entry becomes lower. There are now over 70 countries that own or operate satellites in orbit. Since the orbital range for satellites is limited, the increased crowding will eventually lead to collisions, either accidental or intentional. The damage to these assets can be a monetary blow, can lead to devastating consequences from the sudden signal communication blackout, and can be the cause of escalation of international tensions.

As technology has evolved, space has become more clearly defined as a warfighting domain.

The United States stood up U.S. Space Command (SPACECOM) in August 2019, followed by U.S. Space Force in December 2019, the first military service to be created in over 70 years. These organizations will pave the way for the future of space defense.

The Department of Defense (DoD) published a Defense Space Strategy report in June 2020 that said, “Today, U.S. reliance on space has increased to the point where space capabilities not only enhance, but enable our way of life and way of war.” The report detailed the course of action needed to protect our current way of life and support future space ventures. “U.S. national security and prosperity require unfettered access to and freedom to operate in the space domain. The reemergence of great power competition and a rapid expansion of allied, partner, and commercial activities in space in recent years have drastically changed the character of the space domain.”

Just as the U.S. government pays special attention to critical infrastructure that powers the country, such as electrical grids and water systems, the same or more attention must be focused on American space assets.

The future of space defense will need to entail a more timely and accurate indications of threats and the ability and tools needed to de-escalate or protect. International rules of law and codes of conduct in space will help with de-escalation and any miscommunications or misinterpretations of any behavior of space-based objects, such as satellite maneuvers or collisions. As the space domain becomes more commercialized, these regulations will be even more important.

“I do stay up at night thinking about the challenges of space defense and trying to figure out how to keep our satellites safe from those who want to deny, degrade, or destroy them,” said Trey S., Peraton’s Senior Director, Strategic Space Mission Capabilities. “Maintaining Space Domain Awareness is the first step in posturing ourselves to protect our satellites. Tracking everything that’s out there in orbit provides timely information on threats and vulnerabilities. There are co-orbital threats in space, jamming threats to GPS and communications signals, and ground threats, like missiles or high-powered lasers, all of which could potentially threaten our space assets.”

Defending satellites means mapping out scenarios of reversible and irreversible effects to the health of these assets and identifying corresponding steps to counter adversarial behavior. As space becomes a more complex domain, the web of actions and reactions will become more complex as well.

Dean Bellamy, Peraton’s Vice President, Space Strategies, believes multi-domain command and control is necessary to ensure defense in space and any other battle arena. Adversarial behavior may start in space and move to another domain or vice versa. “The United States must have the information advantage and share data across departments,” said Dean.

In particular, the cyber domain is enmeshed with the space domain; securing space assets will first and foremost be a cybersecurity task. Peraton has spent decades supporting the Air Force Satellite Control Network (AFSCN), which includes cybersecurity personnel. “We ensure that all mission equipment is working for our military,” said Sabrina S., Peraton’s Consolidated AFSCN Modifications, Maintenance, and Operations (CAMMO) Systems Administrator. “We provide space safety analysis to conduct worldwide satellite operations, so it’s fast paced and exciting work. Our tools can sift through data and create alerts to identify and mitigate threats to the Space Force’s internal IT systems and networks.”

Another defense strategy is inevitable: launch more space assets into orbit. “A redundancy system would decrease all threats because damage to any given satellite would have less impact,” said Mark Adams, Peraton’s Vice President, Technology & Engineering. “Borders will be eliminated with global coverage,” said Mark, “but the promise of this new connected world comes with cubesats covering the planet.”

The question of how much to invest in space resiliency will be a tricky balance between the cost of the spacecraft and what it will take to mitigate risk. “It’s the same insurance mindset for anything,” said Matt. “Protecting against threats of any kind can be expensive, but worth it to ensure the safety of the investments in orbit.”