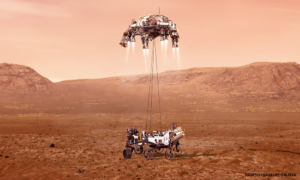 NASA’s Perseverance rover landed on Mars in Jezero Crater on February 18, 2021 at 3:55 pm Eastern. This is NASA’s sixth consecutive successful landing. This mission came with many challenges and hurdles, overcome by diligent calculations and meticulous tests.

Peraton contributed to the Perseverance landing in two important ways.

Second, the NASA Jet Propulsion Laboratory (JPL)’s Deep Space Network (DSN), which is the long-distance communication provider between spacecraft and Earth, communicated with the lander and will communicate with the rover as it explores Mars. Peraton has supported the DSN since 2004.

Acusil is a proprietary lightweight, silicone syntactic foam thermal protection system with proven efficacy over nearly three decades of use on NASA missions. Prior to launch, Peraton employees coated the parachute cone of the Mars 2020 spacecraft, shielding the vital parachute and antennas during the EDL phase, referred to as the ‘seven minutes of terror.’ Acusil does not block the flow of radio frequency (RF) signals for tracking, telemetry, and command, allowing communications with the DSN to continue unabated.

During EDL the spacecraft experiences friction that creates temperatures up to 3,200-degree Fahrenheit. The thin Martian atmosphere does not create enough drag to slow down the spacecraft, so the parachute prevents a crash landing. Acusil enabled the Perseverance rover to land on Mars intact.

The DSN is the world’s largest and most sensitive telecommunications system, comprised of large antennas with very sensitive receivers and powerful transmitters. Peraton’s DSN team has been an integral part of the Mars 2020 mission since well before the Perseverance rover launched aboard an Atlas V rocket on July 30, 2020. The DSN will continue to relay data from the Perseverance rover to the scientists and researchers involved in the mission for the remainder of Perseverance’s lifespan on the Martian surface.

“Perseverance’s landing is a monumental occasion,” said Sonny Giroux, Peraton’s DSN program manager. “I had a moment to breathe a sigh of relief at touchdown, but then my team was back to work, receiving and interpreting Perseverance’s signals. The DSN’s ability to bring data and imagery down to Earth is the first step to making any new discoveries.”

Perseverance has several cameras, two microphones to record the Martian soundscape, a drill in its robotic arm to collect samples, a laser in its mast to study rock chemistry, and an antenna to transmit data to the DSN. Along with searching for water or other indications that life once existed or might still exists on Mars, Perseverance will also monitor the weather and conduct experiments to produce oxygen from carbon dioxide from the Martian atmosphere. Perseverance brought spacesuit material with it from launch, so that NASA can see how the samples hold up before they are worn by humans. The Ingenuity helicopter, which was launched along with Perseverance, will test atmospheric conditions with the first ever extraterrestrial flight.

NASA chose to land Perseverance in Jezero Crater because it was once a lake 3.5 billion years ago, which indicates potential to find evidence of ancient life. Perseverance will build upon the discoveries made by the Curiosity rover, launched in 2012 and still communicating back to NASA through the DSN, and complement every other NASA Mars exploration mission.

Additionally, NASA’s Mars Odyssey, Mars Reconnaissance Orbiter, and MAVEN are currently orbiting Mars. The Curiosity rover and InSight lander are also still in operation. Reconnaissance primarily and MAVEN secondarily will be providing relay communications during entry back to Earth from the lander, in addition to the direct to Earth signals that indicate successful activity.

NASA is planning a future mission with the European Space Agency (ESA) to collect the samples that Perseverance will cache and return them to Earth in 2031.

“I am so proud of the Peraton DSN team for consistently enabling NASA’s mission to understand the climate and geology of Mars as it relates to Earth. I embrace exploration to achieve a greater understanding of our own uniqueness and fragility,” said Giroux.