On October 20, 2020, NASA’s Origins, Spectral Interpretation, Resource Identification, Security-Regolith Explorer (OSIRIS-REx) spacecraft collected well over 60 grams of rock and dust samples from asteroid Bennu. Bennu is almost as old as the solar system and its materials could answer questions about the origins of planets and how life is formed.

“This amazing first for NASA demonstrates how an incredible team from across the country came together and persevered through incredible challenges to expand the boundaries of knowledge,” said NASA Administrator Jim Bridenstine. “Our industry, academic, and international partners have made it possible to hold a piece of the most ancient solar system in our hands.”

OSIRIS-REx is a seven-year mission. Following a two-year journey, OSIRIS-REx successfully entered Bennu’s orbit over 200 million miles from Earth on December 31, 2018. Bennu is the smallest object ever orbited and the first near-Earth asteroid ever reached by a spacecraft.

Never before has a spacecraft orbited so closely and slowly around an object in space. The spacecraft orbited above Bennu at an altitude of 2,500 feet for two years, performing ten operations to survey and map the asteroid in preparation for the six-second collection of these important scientific samples.

NASA scientists chose a point on the asteroid based on surface data for a robotic arm, the Touch-And-Go Sample Acquisition Mechanism (TAGSAM), to burrow into. The TAGSAM head was so full after collection that some of the materials escaped from the collector’s lid. On Oct. 29, NASA successfully stowed away the TAGSAM head in the Sample Return Capsule (SRC) to ensure retention of the invaluable samples. 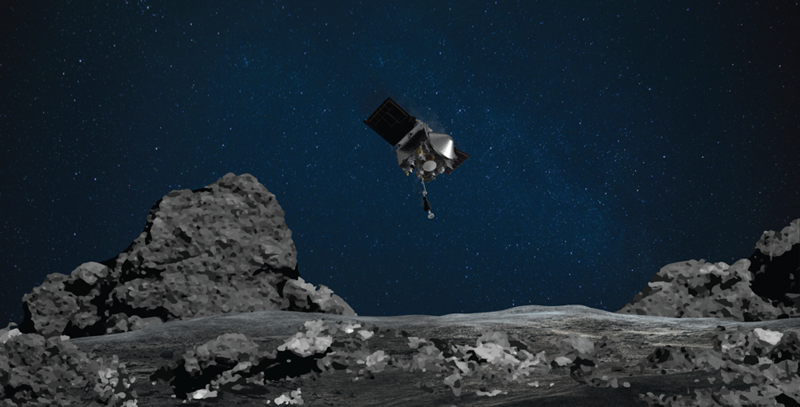 In March 2021, the spacecraft will begin its Return Cruise Phase, with a landing back on Earth scheduled for late 2023. This timeline means that scientists still have years to wait until they can begin analyzing the samples collected.

Ingenuity marks OSIRIS-REx’s mission success and Peraton helped make it possible via mission management and precision tracking of NASA’s Deep Space Network (DSN) in California. The Level 1 support included the critical uplink activity to sequence the event and redundant tracking of the spacecraft as it approached, landed, and departed from the surface of Bennu and returned to nominal state. The Peraton team at the DSN also provided communications to assist the storage resolution mission that ensured no further sample pieces would spill out of the TAGSAM.

The 24/7 critical communications Peraton delivers ensures the constant, uninterrupted flow of data from OSIRIS-REx enabling discovery and helping scientists make accurate predictions of future collisions by asteroids like Bennu – a potentially hazardous object with a 1-in-2700 chance of impacting Earth between 2175 and 2199.

From the beginning stages of maneuver planning to the rapid response to ever-changing configurations and trajectory field verification, the Peraton team was there and will continue to support the OSIRIS-REx mission as it advances our understanding of space and what lies ahead.