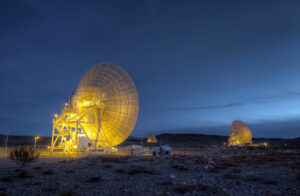 Space is a thing of beauty and an enigma that excites artists and scientists alike. The cosmos instills wonder, awe, and inspiration. There is so much potential in the great beyond: to understand more about the nature of life and what is needed for survival and growth, to search for ancient life on Mars in order to understand the planet’s future, and to learn more about Mars’ atmosphere in order to plan for human exploration.

Uncovering new secrets of the universe cannot happen without NASA’s Deep Space Network (DSN), which will communicate with the rover Perseverance once it lands on Mars next year, ensuring that all data and discoveries make it back to Earth. “We are the telephone company of the cosmos,” says Sonny Giroux, Peraton’s DSN program manager. “DSN is a pipeline between the mission itself and spacecraft, as well as vice versa.”

DSN maintains nonstop coverage at its three sites in Goldstone, California; Madrid, Spain; and Canberra, Australia. Each facility has “follow the sun” operation periods each day during which they take control of the full network while staff at the other two sites largely go offline. The DSN is the world’s largest and most sensitive telecommunications system, comprised of large antennas with very sensitive receivers and powerful transmitters.

“We have the ability to receive signals at the edge of or beyond the solar system,” says Giroux. “These signals come in at a billionth of a billionth of a watt, which we can then amplify, interpret, and disseminate. We are the first to handle new scientific information and we process all images.”

Since 1963, the DSN has been the long-distance telephone operator for outer space ventures. Peraton and its predecessor companies have worked with NASA’s Jet Propulsion Laboratory (JPL), which operates the DSN, since 2004, including recently on the Juno mission to Jupiter and the Parker Solar Probe to the Sun. 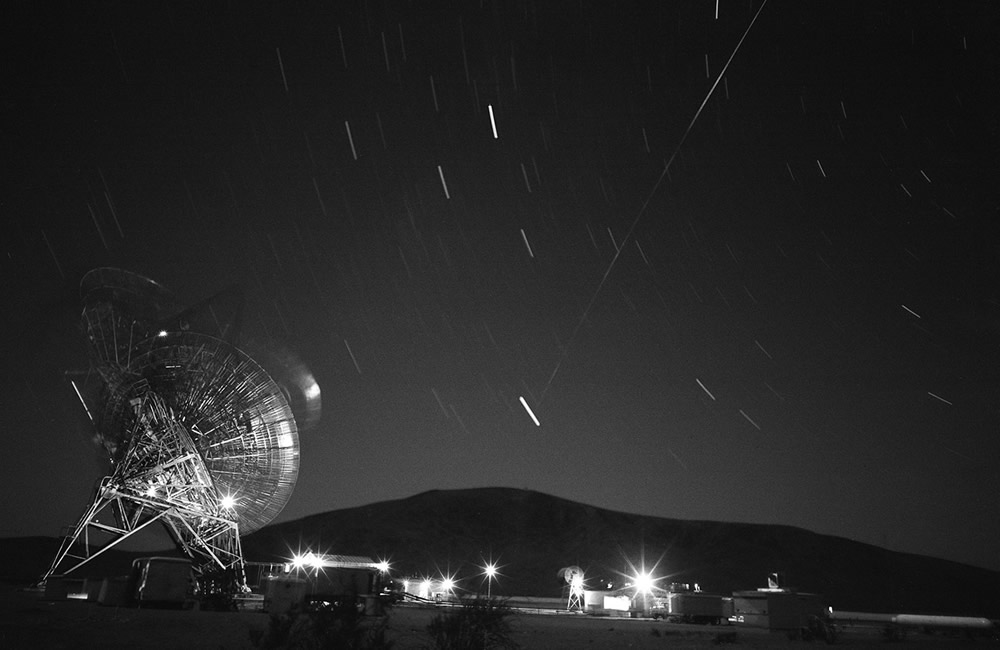 The Deep Space Network has the most powerful antennas, able to send and receive signals from the farthest reaches of the cosmos.
Courtesy NASA/JPL-Caltech.

The DSN is involved in every step of the Mars 2020 mission, serving as a communications link long before the Perseverance rover reaches Mars. This means that Peraton’s DSN team is an integral part of the Mars 2020 mission, providing mission planning and preparation, compatibility testing and validation of ground stations and spacecraft, and engineering services. The DSN data is used to perform a number of course correction maneuvers that will be needed to hit the very small entry window to Mars. After the maneuvers are determined, the DSN radiates the commands up to the spacecraft, and through telemetry, validates they were executed properly. At all times, Peraton handles sustainment, providing technical expertise and troubleshooting to any element of the Ground Network.

“It would be easier to list what we don’t do,” jokes Giroux. The Peraton team also operates and maintains the DSN’s six large antennas at the 52-square-mile Goldstone complex, as well as multiple network and communications systems, several network operations centers, and facilities for testing and logistics. They can track spacecraft minutes after launch and continue monitoring them during the entire mission.

“We are unique in our facilities engineering,” Giroux explains. “We do power cooling and heating, controls, fire protection, and fiber optic connectivity.” The Peraton team even handles logistics, such as shipping and receiving whatever materials are needed for the DSN. “It’s more complicated than it sounds,” he adds.

Each of the DSN sites has a centralized Signal Processing Center with the electronics that move the antennas, process telemetry data, and send out new commands to spacecraft. Peraton’s role for Mars 2020 involves this signal processing. “At the NASA Jet Propulsion Laboratory, we are the Network Operations Center for the Mars 2020 spacecraft,” says Giroux. “JPL will develop the commands and analyze the data that comes back from Perseverance, and we will be providing all communications.”

The DSN provides two types of communication for deep space missions: Direct to Earth and Relay Operations. Direct to Earth is a direct radio signal between the rover on Mars and the DSN. For Relay Operations, signals sent from the rover on Mars are sent to nearby orbiting spacecraft, which send their own data signals back to the DSN along with the rover’s Mars data. “Rather than use a significant amount of rover power transmitting to Earth directly, the signals effectively ‘hitch a ride’ on the data transmission from orbiting spacecraft,” explains Goldstone Operations Manager Chris G.

NASA runs deep space missions every day of the year, but there is a unique pressure for a mission like Mars 2020. “We can’t fix the spacecraft once it’s gone,” says Chris G. “Recovery is challenging because if the spacecraft is millions of miles away, we can’t just go fix a loose screw.”

To avoid these errors, the Peraton team works with JPL engineers to make sure the spacecraft works well with the DSN before it goes on the launchpad. Several years of testing and development go into any deep space launch, including Mars 2020, to make sure every piece of the space vehicle will respond to commands before the pieces are put together, as well as after the vehicle has been assembled. Three months before the Mars 2020 launch, they plan and prep, “down to every member’s transportation plans, taking into account social distancing precautions,” says Chris G.

Up until the rocket takes off from the launchpad, there is a “critical watch period” between 8 and 24 hours, during which the DSN goes through a checklist of everything that needs to happen for success. “If the launch or descent doesn’t go right, you can lose the entire, very expensive spacecraft,” says Giroux.

In 2012, JPL engineers described the nail-biting entry, descent, and landing (EDL) from the outer atmosphere of Mars to its surface as “seven minutes of terror.” The vehicle’s journey is preplanned and unmanned, with absolutely no margin for error. When the previous rover, Curiosity, needed to land on Mars in 2011, the mission team successfully developed solutions to the various problems that came with slowing down a rocket from hypersonic speed to zero at intensely high temperatures in an atmosphere a hundred times thinner than Earth’s. Those working on Perseverance have been planning in the same manner.

Since the Perseverance rover is being built with the same heritage equipment as the Mars Science Laboratory Rover, some risks are lower. “Perseverance is fundamentally the same as Curiosity, at least with regards to communications, just some parameter changes” says Chris G. Perseverance will get enhanced wheels, allowing it to travel up to 12 miles on Mars’ surface. The new rover also will have the capacity for caching geological samples to be collected by future missions.

There are other factors to consider besides the rover itself. Compared to more local space communications, there is a time lag when communicating with spacecraft in deep space. “Talking to Mars takes anywhere from 14 to 30 minutes for a signal to be sent and an acknowledgement to be received, depending on where Mars is in its orbit,” Chris G. explains.

Additional challenges the DSN team face include constant vigilance and course correction during the seven-month “cruise phase” when the spacecraft is on its way to Mars. The DSN will crunch the numbers and make predictions about where the spacecraft is on the journey and what external factors impact its path, catching problems before they arise.

The orbital position of Mars is an important factor in the Mars 2020 mission, beyond just the communications piece of the mission. Since February 2021 is the time when Mars is at its most efficient distance from Earth, the launch needs to be during late July and early August 2020. “Some wonder why NASA is so adamant about doing the launch during this window, but it’s because it’s either now or two years from now,” says Giroux. “Waiting two years could jeopardize this mission and future ones.”

The DSN is an indispensable link for space exploration. The focus of Mars 2020 is to characterize the climate and geology of the Red Planet, as well as seek information that can help prepare for a human presence on Mars. Without the stable DSN communications pipeline, there would be no way to bring the wonders of deep space exploration to Earth and our knowledge of the solar system would stagnate.

The Peraton team at JPL is thrilled to support Mars 2020 and excited to see what Perseverance finds.