Driven by the belief that “At the core of every national security problem is a people problem,” Maggie Feldman-Piltch has built an organization and a movement, the #NatSecGirlSquad, which today is a leading player in the effort to build and support competent diversity in the fields of national security and defense.

#NSGSCon 2019 will address the most pressing national security issues and provide cutting edge strategies on how to best counter those threats.  The two-day conference will feature workshops and speakers geared to arm national security practitioners with the skills and expertise needed to build a workforce that is highly competent and diverse

The #NatSecGirlSquad seeks to ensure every individual it interacts with has the information, ability, and support required to define professional and personal success for themselves, evolve as new priorities arise, and achieve repeated success.

Each month, the #NatSecGirlSquad team interacts with more than 20,000 people spanning six continents and various agencies, industries and sectors, including thousands who are dues-paying members.

The members of the #NatSecGirlSquad come from every military branch, government agencies, graduate and undergraduate programs, Congress, and many other organizations. A small but growing number of its members hail from the corporate sector. Peraton is eager to source top talent and increase the number of high-performing national security professionals who understand how they can make a positive difference for America’s national security by joining mission-driven companies like Peraton.

The Visionary with the Purple Hair

When #NatSecGirlSquad founder Maggie Feldman-Piltch first moved to Washington, D.C., she dreamed of becoming the next Leo McGarry, the hyper-competent White House Chief of Staff on TV’s “The West Wing.” But after settling in to her first job at the American Security Project, a non-partisan public policy & research organization dedicated to national security issues, she realized she faced a more immediate problem: she was one of the only women working at the organization and showing up at national security events.

While working at ASP, Feldman-Piltch was afforded many opportunities, including starting a podcast and a fellowship program, and leading a group to Cuba. But she didn’t encounter any women or younger professionals. She didn’t see them at the table. It wasn’t until pursuing her master’s degree at Georgetown University’s School of Foreign Service that she met her peers, and realized she was not the only person being held back by a lack of women mentors and mentorship programs.

As Feldman-Piltch sought out mentorship opportunities, she found hundreds of other women who universally shared that they sought the same thing and couldn’t find it in Washington or in national security roles anywhere in the world, no matter if they were working in the military, for the FBI, the State Department, or a private company. Instead of giving up, she decided to be the change she wanted to see in the world, and the #NatSecGirlSquad began to take shape. 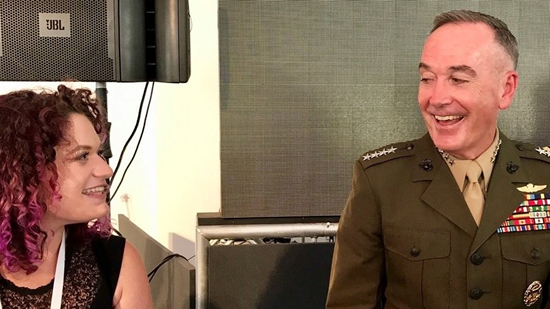 NSGS began life as a Google Groups listerv with several hundred women. But after multiple years of virtual engagement, Feldman-Piltch threw a happy hour in April 2018, where more than 100 women working in national security showed up. The interest in developing a diverse national security community was real, and it warranted more than just an online chat.

Over the next 18 months, the #NatSecGirlSquad movement snowballed, developing into an international dues-paying member organization hosting four to seven events per month with government, academic and corporate sponsors. An initial conference in 2018 drew 180 people for one day; more than 250 people per day are expected for this year’s two-day conference.

What is the Change #NatSecGirlSquad Seeks?

The #NatSecGirlSquad doesn’t worry about firsts. As Feldman-Piltch put it in an interview with Peraton, “We’re not personally invested in celebrating the first female Secretary of Defense; we’re interested in creating a world where we stop counting when women hold national security roles because it is no longer a rare occurrence. We want women to no longer feel alone in national security settings.”

Feldman-Piltch views the #NatSecGirlSquad not as a solution, but as a toolkit intended to help women and other diverse members of the national security community figure out what success is for them, and then achieve that success. As a result, NSGS isn’t focused on quotas or quantity, but on promoting the supremacy of quality; ensuring women are able to succeed because they are “darn good at what they do and are appreciated for just that.”

In the coming years, Feldman-Piltch wants membership to be a stamp of achievement in the community and convey that #NatSecGirlSquad members have developed certain skills and knowledge about national security and the national security workforce. She also will seek to offer continuing education and development opportunities to members and to their employers.

One of the questions that Peraton posed to Feldman-Piltch was how national security companies fit in to the NSGS ecosystem, since many people wrongly think of national security as an issue only addressed through public service in the government or military.

“Being a corporation does not mean you are not doing something in the public good,” noted Feldman-Piltch. “There are certain public goods that fall under the federal government, while there are other public goods where for-profit entities should and can be engaged. It’s time to stop thinking about the private sector as something that is not public service-oriented.”

She noted that while NSGS members “definitely know they can contribute to national security through the private sector” they don’t necessarily know where to start, since there are so many more private companies than public entities to apply to.

She encouraged Peraton and companies like Peraton to not shy away from competing with government agencies for young national security talent. “Who doesn’t want the best people? If you are a contractor, you need get in the ring and compete. Don’t you want the same talent the FBI wants?”

Top photo is credited to M.M.LaFleur