NASA’s Deep Space Network (DSN), operated and maintained by NASA’s Jet Propulsion Laboratory (JPL) and the Peraton team, has been the long-distance telephone operator for outer space ventures since 1963. Two years after its founding, Peraton employee Cliff Y. began working on the DSN, the world’s largest and most sensitive telecommunications system.

At this point in DSN history, Cliff holds the record for the most years supporting the Deep Space Network: 55 years and counting. And Cliff is not slowing down. Currently, Cliff heads the Workmanship Assurance and Training division at Goldstone Deep Space Communications Complex, where the DSN is headquartered.

“I became completely absorbed in the work and the people I work with,” said Cliff. “I lost track of time. I don’t even view this year as a milestone because I have so much left to give.”

“Cliff’s dedication to Peraton’s customer and their vital mission has enabled our ability to communicate to far reaches of the solar system to enable discoveries across the vastness of space,” said President, Chairman, and CEO Stu Shea. “Cliff’s contributions to the NASA Deep Space Network are unparalleled.” 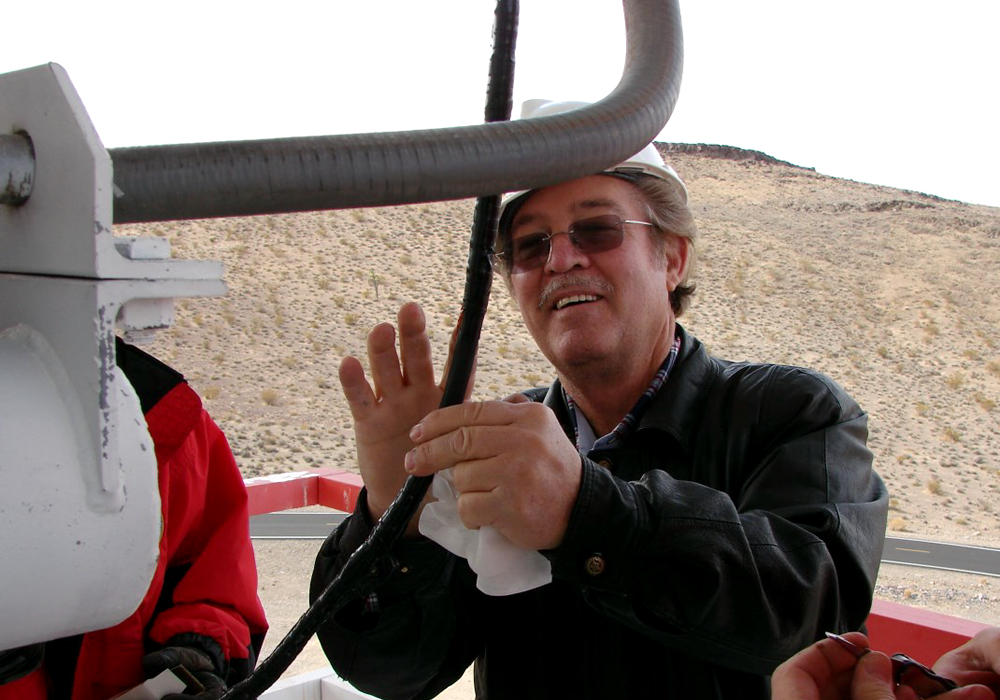 In 1965, Cliff answered an intriguing newspaper job advertisement that mentioned NASA and deep space. For the first five years he worked onsite in a variety of technical roles at JPL, primarily supporting the Surveyor Program that proved the feasibility of soft landings on the Moon. He maintained high-speed electronic printers, tele-type printers, and large plotters. When the first Surveyor soft landing was broadcast on television in 1966, Cliff was operating the plotter at the time, though only his hands were visible to viewers.

He also supported the Apollo mission that put the first man on the moon in 1969. Cliff supported the communications facility at the Apollo ground station, transporting information from Goldstone to JPL, and repairing and inspecting antennas and other critical equipment. It took 24 hours for Cliff’s team to receive data, 24 hours to ship it to JPL, and even more time to turn that information into a picture. Today the process is instantaneous.

“At the time, space exploration was a symbol of hope for civilization,” Cliff said.

In 1970 Cliff transferred to the Goldstone Complex while simultaneously serving in the National Guard at Ft. Irwin. At this time, he worked on projects supporting the Pioneer Saturn and the Pioneer Venus flybys. During the Pioneer Saturn mission, Cliff installed and repaired the first laser switch ever made at JPL as part of his role maintaining the communications equipment for transmission of information from Goldstone to JPL. This task inspired a passion for the emerging field of laser technology and fiber optics; recalling the evolution of technology, Cliff said, “The big thing back then was microwave.”

Along with performing engineering work, Cliff worked in Goldstone’s Training Department, conducting interviews to learn how new equipment worked, then writing a training manual for the system. Each manual was specific to a mission. Cliff also developed his own lesson plans for teaching JPL and Goldstone technicians. In addition to designing certification programs, Cliff has authored several books on fiber optics, photonics, polymers, and soldering, and he also developed a calculus formula for calculating beam divergence.

“Words cannot express my sincere appreciation for Cliff’s dedication to our Nation’s mission in space,” said Chief Operating Officer Jeremy Wensinger. “Congratulations to Cliff for 55 years of work that has mattered and made history; I know he will continue to make our team better for the rest of his impressive career.”