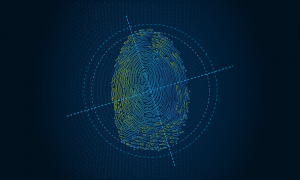 In Bob Renko’s very first court appearance, a defense attorney asked him to define forensics. “The word forensic comes from the Latin word forensis, meaning ‘in open court,’” Renko explained. “So, in its simplest definition, forensics is the application of science to law. It’s a great example of how the digital forensics world differs from other cyber-related fields.”

Over a 35-year career in the digital forensics field, Renko, Peraton’s Director of Digital Forensics, has been called on countless times to testify in court as an expert witness. When Renko takes the stand, he usually discusses the technical processes used to collect evidence and analyze it. His team can figure out who committed a crime, whether an alibi is true or false, and find details of past crimes or evidence of intent to commit future crimes. Uncovering evidence to use in court often closes the case.

Renko joined the U.S. Air Force as a teenager, before completing his degree and being selected as a special agent with the Air Force Office of Special Investigations (OSI). He began his career with OSI doing technical surveillance like wiretaps and vehicle tracking in support of criminal, counterintelligence and antiterrorism investigations. After leaving active duty, Renko rejoined OSI as a civilian special agent specializing in computer crime investigations.

Renko has held numerous positions within OSI, including working at the Department of Defense Cyber Crimes Center (DC3), which fell under OSI until February 2021, when it was realigned under the Air Force Inspector General.

“One of the most rewarding cases I was involved in was while I was at DC3,” said Renko. The team he oversaw had proved a suspect was innocent. “The subject’s wife had made an allegation against him, so that he would be found guilty and imprisoned. But our forensic examination of the evidence showed that it was actually the wife’s boyfriend who had planted evidence to implicate the husband.”

The draw to digital forensics for Renko is precisely these kinds of stories. “Analyzing digital media has a dramatic impact on someone’s life — it could change the course of their life forever,” he said.

There is a sense of accomplishment with every digital forensics case. Renko compares the work to a factory: raw product comes in, workers process it, then the finished product is shipped out. He admits that digital forensics is not for everyone—he has handled very disturbing cases, including many involving child pornography.

Since his time at DC3, Renko’s career has progressed away from hands-on analysis to cyber sector leadership roles in government, from serving as Deputy Director of the FBI’s National Cyber Investigative Joint Task Force to serving as Chief Information Officer of OSI. These roles have taken him all over the world, including Europe, Asia, and the Middle East. “While those jobs were all rewarding, none compared to the satisfaction that accompanied my time at DC3,” said Renko.

Renko’s focus in his career has been cyber investigations, intrusions, security, and insider threats. Within his niche, the pace of change is fast. “If you’re not doing digital forensics every day, you fall behind,” said Renko. “There are always new consumer products and tech innovations, including at Peraton.”

“We’re always looking for ways to speed up analysis without making it expensive or affecting someone’s life, since mistakes cannot be made in a forensics exam without dire consequences,” Renko said. “It’s about finding a balance between quality, speed, and cost.”

Besides creating efficient processes, Renko is always on the lookout for new digital forensics applications. Since the Internet of Things is at the forefront of emerging technology, Peraton is looking at several use cases.  Renko also identified leveraging crowdsourcing for everything from identifying vulnerabilities to cataloging digital artifacts as a potential growth area for digital forensics.