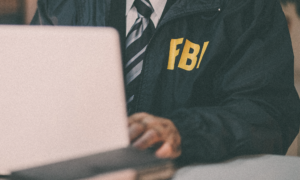 “There is a feeling of accomplishment working an investigation to its conclusion,” said Joseph, a Technology Program Manager in Peraton’s Space & Intelligence Sector. “It is immensely satisfying to provide closure and answers to victims of criminal activity, as well as hold individuals accountable for their illegal actions.”

Joseph began his career at the Federal Bureau of Investigations (FBI), rising through the ranks and gaining experience in a variety of specialized areas: international organized crime, cybercrime, violent crime, white-collar crime, squad supervision, firearms instruction, and SWAT operations. Joseph was drawn to the agency’s mission and the difference agents made not just for U.S. citizens, but for individuals around the world.

After 23 years at the FBI, Joseph joined Peraton to manage contracts in Peraton’s FBI Mission Solutions Subsector. Joseph now helps to support the very mission and the agents with whom he once worked in the field.

“Helping people in need—Peraton fulfills the same goal, the same satisfaction for me as the FBI,” said Joseph.

Joseph manages a team of Peraton engineers who support operations within the FBI’s Operational Technology Division (OTD), which focuses on technology-based solutions. Peraton engineers develop, deploy, and maintain critical components that supports FBI agents while they are in the field solving cases. The stakes are high: the technology cannot malfunction while in use or operations fail, possibly endangering the agents.

Peraton engineers, trainers, and end-user support personnel routinely consult and interact with FBI agents, intelligence analysts, and operational field personnel to help support technology and operations. Peraton engineers support the FBI in their never-ending battle to solve crimes. Despite the rapid pace of innovation, human intelligence continues to be an invaluable resource for the FBI.

“Peraton supports the Bureau behind the scenes,” said Joseph.

A subject matter expert in this area of white-collar crime, Joseph has studied transnational BEC crime networks and the motivations and behaviors of these adversaries. He often presents to organizations about how they can best protect themselves.

BEC criminals use social engineering to hide in plain sight, grooming unsuspecting employees, pretending to be someone else for an extended period to gain trust. A company can have the best firewalls and VPNs, but that human element can quickly defeat the best cybersecurity tactics.

“Companies can’t protect themselves if they don’t know their adversaries,” said Joseph.