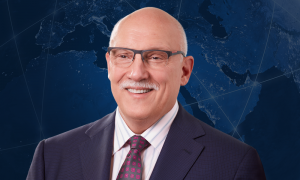 Shea will be honored as the 17th individual to win this prestigious award during the USGIF annual black-tie event on Friday, Dec. 3 in Reston, VA.

“This award recognizes Stu’s singular contribution and undying commitment to the geospatial intelligence community,” said Robert Cardillo, chairman of the USGIF Board of Directors. “Since the start of his career as a software engineer designing computer mapping capabilities in 1982 until today, Stu has been an exemplary leader in our community, advancing the GEOINT tradecraft, and accelerating innovative new capabilities and approaches.”

Shea was one of the original founders of USGIF and the highly acclaimed Geospatial Intelligence (GEOINT) Symposium. Over the course of his career, he has received numerous awards for his leadership within the industry, including the Intelligence Community Seal Medallion, and currently serves on several industry, government, and academic advisory boards. He was inducted into the GEOINT Hall of Fame in 2018 for his service to the geospatial-intelligence community.

“I am incredibly humbled to be recognized among the distinguished list of Lundahl-Finnie Lifetime Achievement Award recipients,” said Shea. “For more than 18 years, USGIF has been instrumental in bringing together government, industry, academic, professional organizations and individuals to build the GEOINT community, advance the tradecraft, and accelerate innovation. I look forward to continuing my work alongside the foundation to help address national security challenges.”

The Lundahl-Finnie award recipient is nominated and voted upon annually by USGIF’s Board of Directors. This distinguished award was named for Arthur C. Lundahl and Thomas C. Finnie, celebrating their accomplishments—in imagery analysis and mapping, respectively—and their legacies within the GEOINT community.