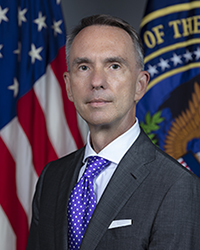 Hallman will be a principal contributor to Peraton’s enterprise-level strategy for current and future intelligence business, specifically focusing on the creation of strategies to integrate intelligence missions and capabilities across organizations and agencies. He will also contribute to Peraton’s ability to support critical government needs related to technology-enabled intelligence operations and the transformation of systems across the Intelligence Community (IC).

Hallman will be charged with developing and orchestrating a bold vision and strategy for Peraton’s progressive intelligence programs and will help drive business growth that leverages both Peraton’s unique technical capabilities and emerging technologies and commercial ventures available to the company.

“Andrew is truly a national asset,” said Stu Shea, Peraton’s chairman, president and CEO. “He is a rare breed with a tremendous command of the complex national security issues facing our nation and understands the critical interdependencies between customer mission, technology, government policy, and national budget priorities.”

“As he’s proven throughout his career, Andrew can create and lead broad, multi-disciplinary teams attacking emerging intelligence issues,” said Shea. “His contributions will be immediately accretive to Peraton’s continued success and help us to further differentiate ourselves from traditional competitors in the national security market.”

Hallman earned his Bachelor of Science in Public Affairs Management from Michigan State University and his Master of Arts in International Affairs from American University School of International Service.

Peraton drives missions of consequence spanning the globe and extending to the farthest reaches of the galaxy. As the world’s leading mission capability integrator and transformative enterprise IT provider, we deliver trusted and highly differentiated national security solutions and technologies that keep people safe and secure. Peraton serves as a valued partner to essential government agencies across the intelligence, space, cyber, defense, citizen security, health, and state and local markets. Every day, our employees do the can’t be done, solving the most daunting challenges facing our customers. Visit Peraton.com/News and follow Peraton on LinkedIn for news and updates.