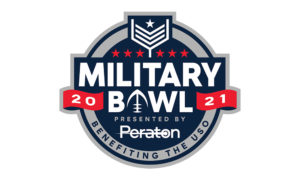 WASHINGTON, D.C. — The 2021 Military Bowl presented by Peraton, benefiting the USO, will be played on Monday, December 27 at Navy-Marine Corps Memorial Stadium in Annapolis, Maryland, the Military Bowl Foundation announced today. The National Capital Region’s postseason college football bowl game continues to match teams from the Atlantic Coast Conference and American Athletic Conference. Kickoff is at 2:30 p.m. ET and the Bowl will be televised on ESPN.

“We can’t wait to get back on the field and enjoy another exciting Military Bowl!” Military Bowl Foundation President & Executive Director Steve Beck said. “The Military Bowl has become a year-end celebration for so many fans who join our mission to support and raise awareness for the nation’s service members.”

“Veterans are an essential part of Peraton’s workforce, with more than 4,000 veterans, reservists and military spouses employed across the nation. But more than just serving as an employer of choice, we strive to be a supporter of the veteran and military community,” said Peraton Chairman, President and CEO Stu Shea. “Peraton is honored to support the unique mission of the Military Bowl Foundation, which benefits the USO and Patriot Point.

“Peraton places great value in the adage of selflessness for the team. The athletes who will take the field at this year’s Military Bowl will succeed or fail together. Football, like national security, is a team sport that rewards collaboration and selflessness. Peraton is excited to play a small role when two great teams face off on December 27.”

About the Military Bowl Foundation

The Military Bowl Foundation is a 501(c)(3) nonprofit organization that operates premier events in the National Capital Region to benefit our nation’s current and former service members. Originally formed to operate the region’s first-ever college football postseason bowl game, the Foundation now not only operates the Military Bowl presented by Peraton but additionally operates the DC Touchdown Club and Patriot Point, a 290-acre retreat for recovering service members, their families and caregivers on Maryland’s Eastern Shore. The Foundation hosts engaging events throughout the year to raise money and awareness for our service members and looks forward to continuing to extend its reach and benefit those who give so much of themselves for our country.

About the Military Bowl

The Military Bowl presented by Peraton, benefiting USO of Metropolitan Washington Baltimore is the National Capital Region’s college football postseason bowl game broadcast on ESPN and featuring a matchup between teams from the Atlantic Coast Conference and the American Athletic Conference at Navy-Marine Corps Memorial Stadium in Annapolis, Md. Organized by the Military Bowl Foundation, the Bowl’s mission is to benefit our nation’s service members including a partnership with USO-Metro and the operation of Patriot Point, a 290-acre retreat for recovering service members, their families and caregivers on Maryland’s Eastern Shore. For the latest updates, visit militarybowl.org, follow @MilitaryBowl on Twitter and Instagram and like Military Bowl on Facebook! The 2021 Military Bowl kicks off on December 27 at 2:30 p.m. ET.

Peraton drives missions of consequence spanning the globe and extending to the farthest reaches of the galaxy. As the world’s leading mission capability integrator and transformative enterprise IT provider, we deliver trusted and highly differentiated national security solutions and technologies that keep people safe and secure. Peraton serves as a valued partner to essential government agencies across the intelligence, space, cyber, defense, civilian, health, and state and local markets. Every day, our employees do the can’t be done, solving the most daunting challenges facing our customers. Visit Peraton.com/News and follow Peraton on LinkedIn for news and updates.