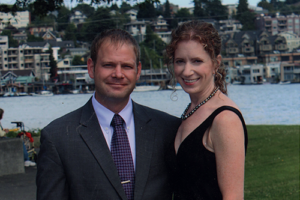 Military spouses are a crucial aspect of the veterans community. To keep the family together, they move every three to five years wherever their enlisted spouse is stationed, which often causes disruptions to their career progression.

“Peraton has been a huge help to my career,” said Carrie C., a systems support engineer. “For a lot of other military spouses, when you have to constantly leave the company and break those ties every time you move to a new place, that’s very difficult. It’s almost impossible to have a successful career because by the time you develop seniority, it’s time to move again. If there is not an office at your new place that you can transfer into, then you quit and start over.”

Carrie has been part of the Peraton family on and off since 2001. After seven years with the company, she married and moved to North Carolina, where her husband was stationed. Since her division did not have an office in that area and could not support remote work at the time, Carrie reluctantly took a leave of absence. Several moves later, she and her husband returned to the Northern Virginia area—and with that, Carrie was back with the company. “I still had the same employee identification number and all of the tenure, as if I hadn’t left the company,” Carrie remembered. “It was huge. It really showed how much the company and the senior management valued people and military spouses, because I should have just started all over again.”

Despite the hardships, Carrie sees a positive element in the constant change in military posts. She has had the opportunity to live in areas of the United States she otherwise would never have considered moving to. “When you know you’re going somewhere for a short time, you make every day intentional and learn to appreciate everything you have at that time and how to make the most out of being in that place for the limited time that you’re there,” said Carrie.

Now located in Florida, Carrie is an offsite on-call employee, which allows her to keep her same job role with her clearance. Carrie manages both the Government customer and corporate Program Management Reviews (PMR), including maintaining program and project risks, statuses, and performance metrics, which enables the Peraton engineers to do what they do best: engineer great solutions.