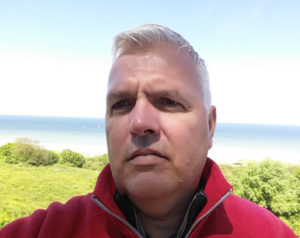 Over more than two decades in the U.S. Air Force – 21 years, 6 months and 3 days, to be precise – Jim had the opportunity to work with a phenomenal and diverse group of men and women who, in his words, “signed up to do whatever it takes to support our country’s Constitution, up to and including giving their life if necessary.” He credits the values, knowledge and valor of his uniformed colleagues with helping form the person he is today.

Though he retired as a Staff Level Meteorologist and specialized in weather forecasting, environmental intelligence, and developing next generation weather systems, he also deployed with the U.S. Army to support multi-national contingency operations and helped manage the second largest software activity in the Air Force. Overall, he describes the experience as a “wild and very educational ride.”

Today, Jim is a Program Manager in Peraton’s Bellevue, Nebraska office, supporting our Air Force Weather portfolio. He’s been with the company in its current and legacy form since 2006.

Jim credits the military with having the greatest impact on who he is today, outside of his own parents. It taught him to understand what’s truly important: treating all people with respect; being positive; thinking critically; continuing to grow as a person and develop your professional abilities; and focusing on results. He believes those qualities were critical in preparing him for his role at Peraton.

His transition from the military was not easy, though. He grew up in a military family, so when Jim retired, it was the first time in his life the military wasn’t telling him what to do, where to live, and how to act. But the support of his Air Force brethren and the embrace of his new Peraton family ultimately enabled him to make a successful transition to civilian life.

Jim was honored to be able to serve his country and would encourage anyone who has the chance to serve to do so in any capacity they can, not just for the honor of service, but for the many tangible and intangible benefits rarely found elsewhere in America.

“On this and every Veterans Day,” Jim says, “we remember all of those who served with valor and honor, and especially those who gave the ultimate sacrifice to provide us the freedoms we enjoy today.”