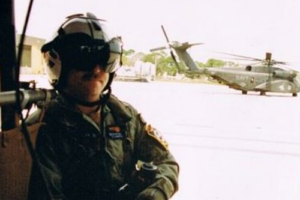 The most rewarding aspect of Geoff M.’s decade-long military career as a Naval Aircrewman was the camaraderie among his fellow flight crew. “We took our lives in our own hands every day, so building a good rapport with everyone around you was important,” said Geoff. “The driving factor was to put your trust in your team and make sure you were successful in the mission that you did together.”

That collaboration and dedication to the mission has stuck with Geoff even after leaving the U.S. Navy in 1999. During his service, Geoff spent time in Korea, supported Desert Storm and Desert Shield from Bahrain, helped with earthquake disaster relief in San Francisco, and flew in a MH-53 helicopter on Airborne Mine Countermeasures missions.

His transition out of the military was not a planned one—after 10 years and 3,000 hours of flight time, Geoff was proactively offered a local civilian job that would result in him spending another 10 years as a civilian test analyst at the Naval Surface Warfare Center in Panama City, which was also his last duty station.

As the project manager liaison for all types of flight tests, from sonars, laser systems, unmanned aerial vehicle (UAV) sensors, and much more, Geoff gained valuable experience in cutting edge unmanned systems technology, which he now applies at Peraton as the senior project manager for the Unmanned Systems Project management Office. At Peraton, Geoff looks for new opportunities in the unmanned domain and develops contract bids.

Though he only joined Peraton three months ago, Geoff has fit right in. Since many of Peraton’s unmanned systems employees are also veterans, the military culture of being driven towards mission-oriented success has continued on the corporate side. “Culture is important in any organization,” said Geoff. “So when you get a group of people who are like-minded, you can accomplish a lot. We have some colleagues without a military background, but once they come into that military mindset and see how it fits into our business, they want to be a part of it.”