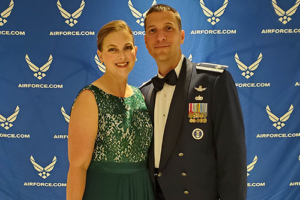 Bonnie E is one of a small number of Americans who is not only a veteran, but is also the spouse of an active duty service member. Because of that dual identity, she works remotely for Peraton supporting an Intelligence Community customer while living near Moody Air Force Base outside Valdosta, GA, where her husband manages an Air Force regional recruiting squadron.

Today, Bonnie’s employment with Peraton is beginning to rival her length of service in the Air Force, where she led teams working on missile and space programs for seven years after earning her commission as an officer.

Bonnie began her career as an Air Force missileer, responsible for command, control, communication and launch activities at a missile facility. After completing missile training, she followed a standard track, serving first as a deputy and then as commander of an operations team. During her time working in this role, highlights outside of her daily role included escorting Russian representatives who visited U.S. missile facilities as provided by the START Treaty. Today, her uniform and patches from those years are on display at a base history museum that highlights women in the military.

After several years, Bonnie returned to training to switch over to the space operations side and became a satellite communications operator for the 3rd Space Operations Squadron (3 SOPS), where she first worked on the Defense Satellite Communications System 3 (DSCS-3) and Wideband Global SATCOM (WGS) satellites, then became a crew commander, and ultimately served as the chief of ground engineering for 3 SOPS. Today 3 SOPS is part of the U.S. Space Force.

Bonnie’s departure from the Air Force was mandated by force reductions. “It was a bittersweet experience,” she said, “because at the time I wanted to keep serving my country.” But she also credits the decision with allowing her family to stay together; if she and her husband had continued to serve concurrently they could eventually have been stationed in different parts of the country.

Not long after separating from the Air Force and moving to D.C. for her husband’s next duty assignment, Bonnie joined Peraton in 2014 as one of the first people hired for a new contract supporting a U.S. Intelligence Community customer. She continued to work for the program remotely even as her family has moved two more times,  supporting the program management office for the contract.

Today, in addition to being a veteran and a Peraton employee, she is also active in her local military community, providing support to the other families in the squadron her husband leads. “We represent the Air Force as a military family,” she said, noting that she and her children have participated in military parades, and supported Air Force recruiters during the Daytona 500.

“The military and employers is starting to recognize that there is a lot of talent with military spouses and it’s hard for them to move and find something that always matches their skillsets,” Bonnie noted, “hopefully employers like Peraton will continue to create new roles and opportunities for spouses!”