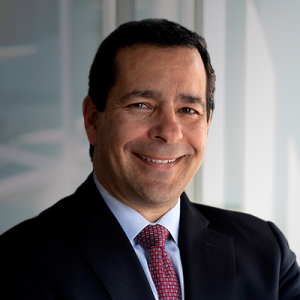 AN EXPERT IN COUNTERINTELLIGENCE AND SECURITY WITHIN THE U.S. INTELLIGENCE COMMUNITY, U.S. GOVERNMENT, AND THE PRIVATE SECTOR

HERNDON, VA – April 13, 2021 – Peraton has named former Director of the National Counterintelligence and Security Center (NCSC), William (Bill) Evanina to its Advisory Board.

“Never in the history of our country has the threat of adversarial intelligence collection across government and the private sector been as pronounced as it is today,” said Stu Shea, Peraton’s chairman, president, and CEO. “With more than three decades of service to our nation, Bill is an undisputed expert in counterintelligence, security, and risk mitigation and is a tremendous addition to Peraton’s Advisory Board.”

Evanina joined the Office of the Director of National Intelligence (ODNI) to lead the NCSC in 2014. He was later confirmed by the U.S. Senate, serving both Presidents Obama and Trump. At NCSC he had executive responsibility for the execution of many critical counterintelligence and security programs, including the National Insider Threat Task Force, Counterintelligence Cyber Operations, Supply Chain Threat Risk and Mitigation, and Critical Infrastructure Threat Awareness and Mitigation.

While at NCSC he also led the effort to successfully automate critical elements of the security clearance process and helped to establish the system by which clearance-holders could be continuously monitored.

Prior to joining the ODNI, Evanina served as Chief, Counterintelligence Division, Counterespionage Group, Central Intelligence Agency, where he led efforts to combat espionage activities in the U.S. and globally. Earlier, he spent more than 16 years with the Federal Bureau of Investigation, rising to Assistant Special Agent in Charge, Washington Field Office, National Security Branch. While at the FBI he led all field office special programs as well as the Joint Terrorism Task Force.

Comprised of proven government and industry technology experts, Peraton’s Advisory Board provides advice and counsel to the company on its strategic direction.