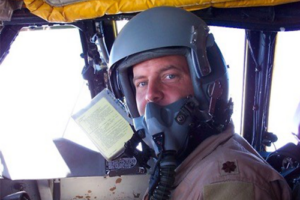 For two decades, Jeff V’s job consisted of long commutes. Except his commutes were a little different and a lot longer than everyone else’s. As a B-52 pilot in the U.S. Air Force, Jeff flew a plane that is an essential component of the United States’ long-range strike capability, capable of taking off and landing from sanctuary while striking enemy targets in far-flung areas of the map.

Flying out of Diego Garcia in the Indian Ocean, Jeff supported multiple wars and other operations that required him to spend his entire day in the air. During Operation Enduring Freedom in Afghanistan, for example, his five-person crew would spent 12-14 hours at a time in the air, traveling 8 hours round trip in order to spend 3-4 hours “on station” supporting U.S. troops on the ground in Afghanistan.

He retired from the Air Force in 2017 after more than 25 years of service, first as an intelligence analyst and then as a pilot. In addition to multiple deployments where he operated out of Diego Garcia in support of operations in Afghanistan and Iraq, he also spent time in South Korea, Saudi Arabia and Guam.

“I’ve lived in or been on extended deployments all over the world, so I’ve experienced different cultures and work for and with talented and diverse people who taught me along the way. Those exposures have helped me tremendously in my leadership role,” Jeff said.

As a pilot, he learned a number of skills that he applies to his job and his team today. His years in the air taught him the importance of patience as well as collaboration: his plane had a crew of five, each person essential to the job. He also learned to be a better problem solver through root cause analysis, looking for the cause of a problem instead of fixating on a symptom. “If you ask why five times you get to root cause,” Jeff said, “along the string of questions you’ll understand what really causes the problem.”

Jeff’s transition from the Air Force in 2017 was a bit bumpy. He retired in Louisiana and moved to Colorado Springs to start his civilian career without knowing anybody.  It took him 6-7 months to build up a network of contacts before he obtained his first significant contract job. It wasn’t his dream job, but it was a start to his civilian journey and gave him more time to focus on his family and his own health.