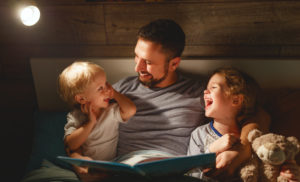 Every child wants to look up to their father and be proud of what he does for a living – even if what he does for a living may be rather hard to understand. As we honor dads this Sunday, we caught up with a couple of our Peraton dads – Ken Lavoie, DoD Operations Vice President and Matt McQueen, Chief Communications Officer – to get their thoughts on being a dad, playing a significant leadership role at Peraton, and balancing the two responsibilities.

Whenever someone becomes a father, they quickly discover that kids don’t come with an owner’s manual. However, there is definitely no shortage of advice for taking on this important role. The best career advice Ken received when he became a father was, “Endeavor to persevere! I actually got that quote from the movie, ‘The Outlaw Josey Wales,’ but it rings true and I think of it in those times when we need to stay the course.”

As children start to grow, they have a tendency to want to brag about their dads and what their dads do for a living. This can be rather simple and satisfying if your father is a police officer or a firefighter. But the dads at Peraton are also able to do some pretty cool things. Ken recalls, “I’ve traveled from Thule, north of the Arctic circle to Diego Garcia in the Indian Ocean. I’ve watched launches from Cape Canaveral and I’ve seen dolphins training to conduct mine hunting operations. I think children and adults alike think my job is pretty cool.”

Matt’s kids think his job is awesome for a little more tangible reason. Matt explains, “My kids LOVE the tradeshow giveaways that I bring home for them. They’d probably think that having the opportunity to pick out “tchotchkes” for Peraton would be pretty cool.”

As important as Ken’s and Matt’s positions at Peraton are, their roles as fathers are even more so. Balancing the two can be a tricky proposition. Ken has some excellent advice for balancing home and work life. Ken says, “It’s simple – try not to bring your work home. I mean this from both a mind and attitude perspective. No matter how bad a day you’ve had, when you walk through the door at home, be thankful and appreciative for the great life you have. It’s like flipping a switch. When you’re home, focus on your family.”

Matt echoes Ken’s sentiments and adds, “Put your work brain on hold when you get home. Be present for your kids. In addition, I’ve always tried to explain to my kids – admittedly with varying degrees of success – what I do and why I do it so that they understand why I have to leave the house early and come home late, why I travel, etc. For all of us it translates into focusing on the quality of time spent together, rather than the quantity.”

With such a strong focus on national security, Ken’s position at Peraton is extremely serious and he carries a tremendous amount of “pull” around Peraton. His job as a dad? Not always so serious. When it comes to “pull” at home, his favorite dad joke is to tell his kids to, “Pull my finger!” Our advice to his kids, “Don’t.” Matt also has his own groaner of a dad joke, “What do you call a bear with no teeth? A Gummy Bear.”

You guys are great dads, but don’t give up your day jobs.