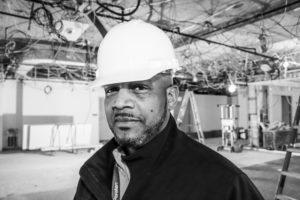 Someone to watch over us.

Greg has had a long-standing passion for protecting others. As facility operations manager, Greg enforces protocols throughout the entire Peraton enterprise to make sure his colleagues are safe. Partnering with security, he and his team solve every day challenges – from triaging general needs to overseeing the mammoth construction efforts happening at Peraton’s headquarters in Herndon, Virginia. His desire to pursue a career in facilities management stems from his driving force to protect and serve others as well as the helping hand of a beloved friend.

Following high school, Greg enlisted in the United States Navy. With little actual knowledge of the military life he signed up for, Greg believed it was fate that drew him to enlist. In the Navy, his assignment as a mass communications specialist lasted 10 years where he learned the art of the mass media trade and complex logistics of public affairs work. He didn’t know it at the time, but his experience bringing together designers, photographers, draftsmen, and organizing print production was actually preparing him for the rigors and challenges of facilities management. And though he enjoyed his role in mass communications, Greg believed in another calling – serving and protecting others. After leaving the Navy, Greg sought a career in security while pursuing a criminal justice degree.

Greg became a security guard and eventually landed a position at Peraton working for Tim Spicer, a respected mentor and friend who tragically passed away from cancer in 2018. By highlighting the common objectives of safety and security, Tim encouraged and empowered Greg to transition from security guard to facilities manager. Today, Greg is committed to carrying on Tim’s life-affirming legacy. Greg says, “Tim shed a positive light on everything he touched. He was so full of life – right up to the end. I hope to continue his mission of safety, security, and helping change lives through positivity.”

Each career journey at Peraton is unique. Start yours today.