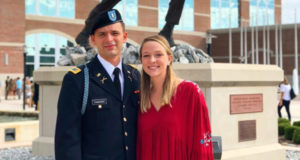 Blake is a veteran, but he is far from done serving his country. He currently is a 2nd Lieutenant in the Maryland National Guard, where he is an infantry platoon leader in charge of 36 soldiers. He is one of Peraton’s numerous Reserve and Guard members who balance their civilian and military careers with the full support of the company and their coworkers.

At Peraton, Blake works as a Reverse Engineer in the Annapolis Junction, Maryland office, serving as an engineering jack-of-all trades who helps clients explore how third-party products can be modified to fit their needs by performing mechanical, electrical and software analysis. He is also one of Peraton’s newer employees, having joined the company in 2019.

Blake is also relatively new to the National Guard, joining the Guard after completing the Reserve Officers’ Training Corps program at Embry-Riddle Aeronautical University in Arizona in 2017. He joined the military because he wanted to serve his country and knew that it was rare to have someone offer to pay for your school and give you a job where you were put in charge of peoples’ lives while defending your country.

He specifically chose the Guard because he felt it was the best way to advance his engineering skillset while also serving his country. He always wanted to be an infantry officer, but he knew that if he went on active duty, he would not have the opportunity to develop his technical skills, which is what he is able to do every day at Peraton. Serving in the Guard and working for Peraton allow him to find a positive balance, which he maintains by keeping the two responsibilities fully separated, except when he must leave the office for extended Guard duty. In those cases, he works diligently to notify his coworkers and develop plans to help them cope with his temporary absence.

He’s also seen how his educational background and Peraton job skills have benefited his military unit. “When there is any kind of communication breakdown, I’m asked to fix it because I have the technical background. Just a few weeks ago we were trying to set up a remote computer lab in the field but couldn’t get a signal. From my work at Peraton, I recognized that the building we were in was diffusing the signal. No one believed me at first, but when we moved outside and received a signal, people thought I was a genius!”

His most memorable experience from service so far was training in the field in Georgia, where he led infantry patrols 24/7 for five days straight while eating MREs and coping with summer heat. But he will have a new opportunity to develop memories in 2020, when his unit deploys overseas. He’s grateful to work for Peraton, where everyone has been extremely supportive of his impending departure.

Photo: Blake and his sister Brooke after his graduation from the Infantry Basic Officer Leadership Course at Fort Benning, Georgia.